Neil Peart – Burning for Buddy: A Tribute to the Music of Buddy Rich Volume II 1997 Geddy Lee – My Favourite Headache 2000 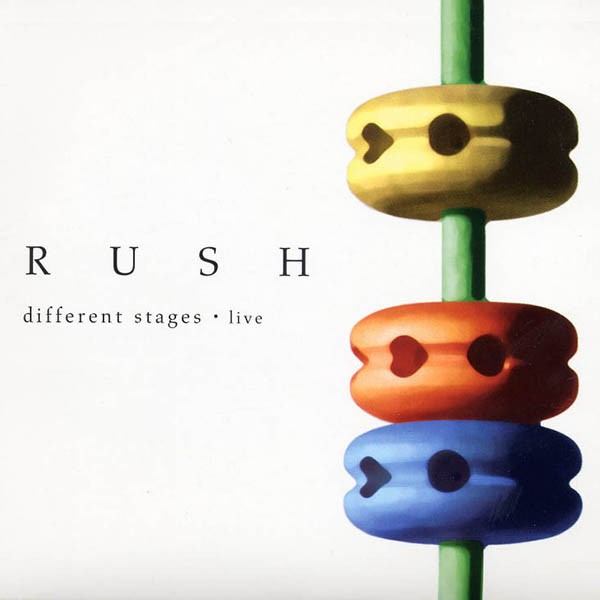 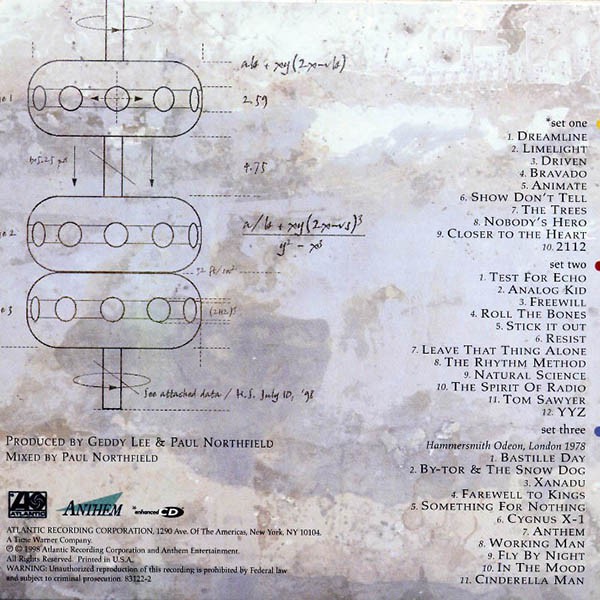 Different Stages was largely recorded at the World Amphitheater on June 14th, 1997 in suburban Chicago during the 1997 Test for Echo tour, the first tour the band did “An Evening with Rush” without a supporting act. “Everything worked well that night: our playing, the audience, and the venue’s acoustics” Alex said in 1999. Three songs from the 1994 Counterparts tour were also included.

The third disc is taken from a performance at the Hammersmith Odeon in London during the A Farewell to Kings tour in 1978.

“We came across it when we were clearing out a tape storage room. Geddy had a bit of a cold when we did that gig and after hearing the tapes initially, didn’t feel that great about his singing. So the tapes were put away and we basically forgot about them. But when we came across them again, we knew we had something that was very cool.” – Alex Lifeson, 1999.

This collection was recorded over a span of 20 years, primarily during 3 tours. Our desire was to record many shows hoping to capture some “magic” performances as naturally as possible. But, as Murphy’s Law would dictate, with well over 60 shows to choose from, we found ourselves being drawn to a mere handful. We have tried not to “mess” with these tapes very much and to present something that we think represents a fairly definitive retrospective of our live work and changing sound over that period of time.

Of course, no band is an island, and so we thank our various crew members, management staff and drivers throughout the years who have been the unfailing support system that has kept us rolling, stage to stage, with great dedication and professionalism, and good humour.

But most significantly, we would like to thank our many fans around the world for their long-standing support which, to our continuing amazement, has enabled us to hang around for so damn long – despite the inherent weirdness of our music!

Best wishes to all
Geddy

They travel in the time of the prophets
On a desert highway straight to the heart of the sun
Like lovers and heroes, and the restless part of everyone
We’re only at home when we’re on the run
On the run

They travel on the road to redemption
A highway out of yesterday — that tomorrow will bring
Like lovers and heroes, birds in the last days of spring
We’re only at home when we’re on the wing
On the wing

We travel in the dark of the new moon
A starry highway traced on the map of the sky
Like lovers and heroes, lonely as the eagle’s cry
We’re only at home when we’re on the fly
On the fly

We travel on the road to adventure
On a desert highway straight to the heart of the sun
Like lovers and hereos, and the restless part of everyone
We’re only at home when we’re on the run
On the run…