More than 40 million records sold worldwide. Countless sold-out tours. A star on the Hollywood Walk of Fame. Inducted into the Rock and Roll Hall of Fame. Officers of the Order of Canada. And that's all very nice. But for these three guys, it's all about the music, their friendship, and the fans. 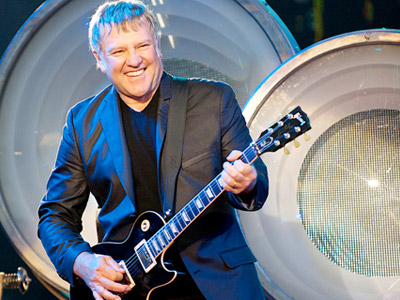 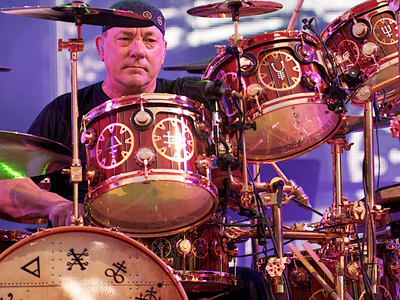 Equal parts Led Zeppelin, Cream and King Crimson, Rush burst out of Canada in the early 1970s with one of the most powerful and bombastic sounds of the decade. Their 1976 magnum opus 2112 represents progressive rock at its grandiose heights, but just a half decade later they had the guts to put epic songs aside in favor of shorter (but no less dynamic) tunes like “Tom Sawyer and “The Spirit of Radio” that remain in constant rotation on radio to this day. Absolutely uncompromising in every conceivable way, the trio has spent the last 40 years cultivating the largest cult fan base in rock while still managing to sell out arenas around the globe.

Rush was formed in August 1968 in the Willowdale neighborhood of Toronto. The original lineup included Alex Lifeson on guitar, Jeff Jones on bass and John Rutsey on drums. Jones was soon replaced by Geddy Lee, and, in 1974, after the release of the group’s debut album, Rutsey left and was replaced by Neil Peart (pronounced /ˈpɪərt/). That lineup Lee on vocals, bass and keyboards; Lifeson on guitar, and Peart on drums — has remained stable throughout the years.

The group played around on the Toronto scene for a few years and then, in 1973, released its first single, a cover of Buddy Holly’s “Not Fade Away.” The record didn’t do well, and the band decided to form its own label, Moon Records. The group released its first album, Rush, in 1974. The album wasn’t faring too well until a Cleveland radio station, WMMS (100.7 FM), added the song “Working Man” to its playlist. The album was then picked up by Mercury Records in the U.S., and sales began to skyrocket.

The following year, Rush released two albums, Fly by Night and Caress of Steel. The group’s big breakthrough came the following year with the release of the album 2112. The album featured a 20-minute title track divided into seven sections. It went platinum in Canada, and Rush hit the road, touring the U.S. and Canada. The tour culminated with a three-night stand at Massey Hall in Toronto. The group recorded the shows and released its first live album, All the World’s a Stage, in 1976.

Rush then re-located to the U.K., where the band recorded its next two albums, 1977’s A Farewell to Kings and 1978’s Hemispheres, at Rockfield Studios in Wales. The music on those two albums ventured more in the direction of progressive rock.

“As our tastes got more obscure, we discovered more progressive rock—based bands like Yes, Van der Graaf Generator and King Crimson, and we were very inspired by those bands,” said Lee. “They made us want to make our music more interesting and more complex, and we tried to blend that with our own personalities to see what we could come up with that was indisputably us.”

Rush’s popularity continued to soar, and in 1980, with the release of Permanent Waves, the group became one of the most successful bands in the world. The album marked something of a change in the group’s sound. The songs were shorter, and the group’s influences now included reggae and New Wave. Permanent Waves reached the Top Five in the U.S.

With the release of Signals in 1982, Rush’s sound underwent yet another change. Synthesizers were now at the forefront of the group’s music. In addition, the album included Rush’s only Top 40 hit single in the U.S., “New World Man.” The album also expanded the band’s use of ska, reggae and funk.

Through the rest of the Eighties, the band kept a somewhat lower profile, not spending as much time on the road. Even so, its albums continued to go gold or platinum.

With the 1989 album Presto, Rush once again began emphasizing guitar instead of keyboards. The transition from synthesizer to guitar continued with 1993’s Counterparts and 1996’s Test for Echo. After touring to support the latter album, Rush began what amounted to a five-year hiatus in 1997. The layoff was brought on by personal tragedies in Peart’s life.

The band returned to the studio and released a new album, Vapor Trails, in 2002. For the first time since the Seventies, Rush did not use a single synthesizer, organ or other keyboard on the album.

To celebrate their 30th anniversary, Rush released Feedback, a studio EP, in June 2004. The recording featured Rush’s covers of eight songs by some of the artists that influenced the group, including Cream, the Who and the Yardbirds. The band also hit the road in the summer of 2004, playing anniversary shows in the U.S., Canada, the United Kingdom, Germany, Italy, Sweden, the Czech Republic and the Netherlands.

Rush continued recording and touring, releasing the albums Snakes & Arrows in 2007 and Clockwork Angels in 2012.

Following this release, the R40 box set was announced and released on November 11th, 2014. This release commemorated the 40th Anniversary of the release of the band’s self-titled debut album.

Approximately one year later in 2015, Rush then embarked on the R40 Live Tour, showcasing decade’s worth of material. Following this tour a DVD/Blu-Ray titled R40 Live was released. During this same year, Universal Music Enterprises kicked off their own celebration of the band’s 40th Anniversary by re-issuing all of the Rush albums in Mercury’s catalogue, in chronological order.

Fast forward to the end of 2016 & 2017 and two more important Rush releases were announced: the Time Stand Still Documentary (profiling the R40 Live Tour) and 2112 40th Anniversary. The latter release was issued on various formats to celebrate the 40th Anniversary of Rush’s iconic album 2112. Formats released include 2CD/DVD, 3LP and
Super Deluxe.