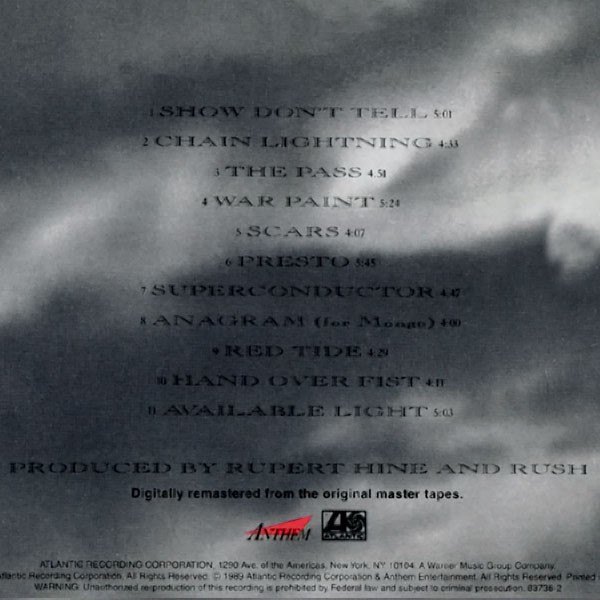 Presto is Rush’s 13th studio album, released in 1989. It was recorded at Le Studio in Morin Heights and at McClear Place in Toronto. Presto was Rush’s first album with Atlantic Records, which the band signed to in early 1989 after a longstanding relationship with Mercury/PolyGram. It was co-produced by Rupert Hine, an English musician, songwriter and producer who had worked with Saga, The Fixx, Howard Jones, and Bob Geldof.

The album’s lyrical centerpiece is its atmospheric single ‘The Pass,” in which Neil addresses teenage isolation and the tragic romanticism of youth suicide.

“All of us get lost in the darkness; dreamers learn to steer by the stars”

One strange quirk at the time was the fact that the first side of Presto was much longer than the second, forcing Rush to instruct fans to play the A side much louder to compensate for sound loss.

A wave of the wand to:

At McClear Place: Bob, Rick, Robert Hinge, Stats Dooey, Ohe 2he. At Metropolis–Karen, mini-Matt, Mark, Catherine, and all the hospitable staff and management.

We also offer a tip of the magical hat to Natasha and Kingsley, Red and the 2-Bar, Doug Morris and Atlantic Records, Mike Roberts for the acorn of “Superconductor,” and a very special thank you to the Flemings: Peter, Jenny, Joe, and Alex, for their hospitality in London.

Brought to you buy the letter “D.”

how many times do you hear it?
it goes on all day long
everyone knows everything
and no one’s ever wrong
until later

who can you believe?
it’s hard to play it safe
but apart from a few good friends
we don’t take anything on faith
until later

I’ll give it due reflection
watching from the fence
give the jury direction
based on the evidence
I, the jury