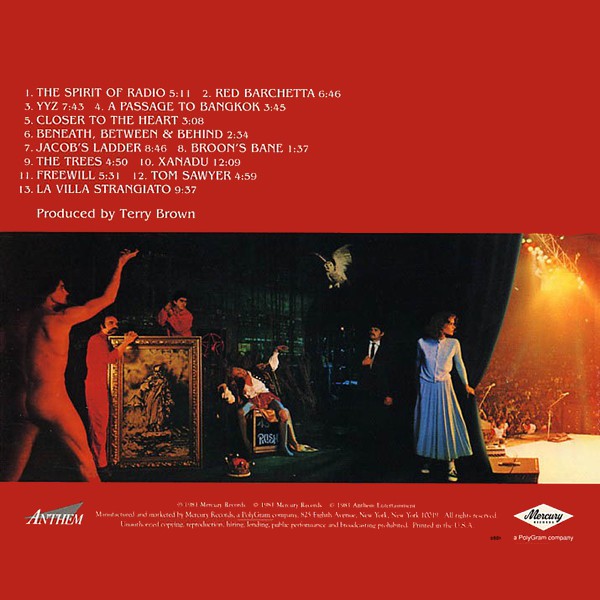 Exit… Stage Left, the band’s second live album, was recorded at The Apollo in Glasgow, Scotland on June 10th & 11th, 1980 and at The Forum in Montreal, Quebec in March 27th, 1981. A video release with the same name, with slightly different content, was released in 1982 on VHS and later on Laserdisc, and in 2007 on DVD.

“Yes, we made a few repairs to the record. A part here and there would ruin an otherwise perfect song, so we patched up the odd bit. Sometimes we had hit the wrong thing or gone suddenly out of tune. It would be so much easier if we were perfect.” – Neil Peart, 1981.

Ian Melhuish as the Puppet King

“A Passage To Bangkok“, “Closer To The Heart“, “Beneath, Between & Behind“, and “Jacob’s Ladder” recorded in the U.K. by Mobile One
Engineered by Andy Rose, Tech-man Barry Ainsworth
Set-up by Tim and James

This album is dedicated to the world-renowned they – (Slider’s uncles, Eddie and Glen).
Alex’s performance in Broon’s Bane is dedicated to Elliot.
A special tribute to the Glaswegian Chorus for the backround vocals on Closer To The Heart. Nice one, folks!

Our personal thank you to the Griffin family for their wonderfulness, and to the people of NASA for their spectacular launch of the Columbia which we were privileged and thrilled to witness.

We also should include a (loose) translation for the new lyrics to the “Danforth and Pape” section of “La Villa Strangiato“:

Well, just a few more words! In seven years of touring we have made many friends in many different places. Some have worked for us, some have cheered for us, and some have just been nice to us. For reasons beyond our comprehension, we have become increasingly more popular, and hence stretched ever more thinly among ever more people. If sometimes we can’t give the time they deserve to our friends and loved ones, we hope that they will understand and forgive us. After all, we didn’t change, everybody else did!

The Spirit of Radio

Begin the day
With a friendly voice
A companion, unobtrusive
Plays the song that’s so elusive
And the magic music makes your morning mood

Off on your way
Hit the open road
There is magic at your fingers
For the Spirit ever lingers
Undemanding contact
In your happy solitude.

“For the words of the profits,
Are written on the studio wall,
Concert hall –
Echoes with the sounds…
Of salesmen.”