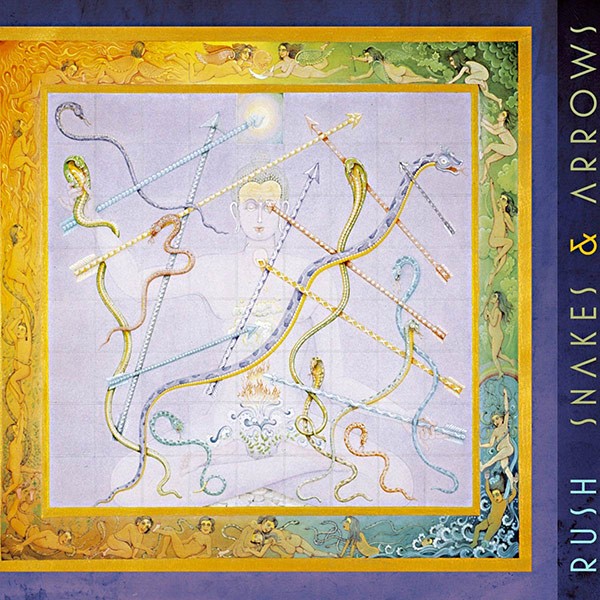 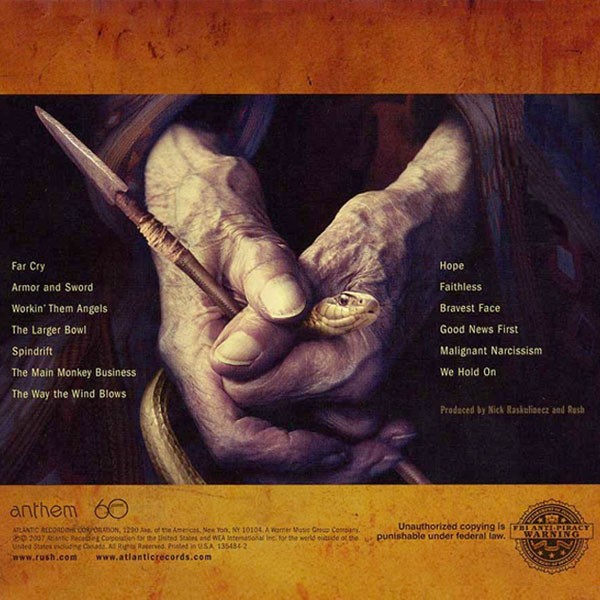 Snakes & Arrows is Rush’s 18th full-length studio album and their first studio outing since 2004’s Feedback. It was also the band’s first complete studio album since Vapor Trails in 2002. It was recorded between November and December 2006 at Allaire Studios in New York’s Catskill Mountains and mixed and mastered at Ocean Way Recording in Los Angeles.

The album was co-produced with Grammy Award-winner Nick Raskulinecz. Snakes & Arrows was the first time the band worked with Nick. It was completed months ahead of schedule, and as Alex recalled:

“We had access to two studios and nothing else to do at night.”

The studio’s very remoteness and a realized sense of harmony, spurred on the band to new creative heights.

“Workin’ Them Angels” illustration created by Hugh Syme with the assistance of George Eastman House, who supplied the original Lewis Hine photograph on which the illustration is based

All songs composed by Lee and Lifeson, with lyrics by Peart, except “Hope“, composed and performed by Lerxst Lifeson, all by his own self

Geddy would like to thank: Fender Musical Instruments and the Fender Custom Shop, Jim Burgess and Frank Szabo of Saved By Technology, Coll Audio, Tech 21, and Rotosound Bass Strings for their technical contributions, Duke and Ewan for their exceptional canine behavior in a supporting role, and last but certainly not least, my crowd at home: Nancy, Kyla, Julian and Lauren, for their unequivocal and loving support.

Neil would like to thank: John Good, Don Lombardi, and Garrison at Drum Workshop, Mark Love and Chris Stankee at Sabian, Pat Brown and Kevin Radomski at Promark, Darren Shoepp at Roland, Michelle Jacoby at Remo, Greg Russell at neilpeart.net. Freddie Gruber, Matt Scannell, Lorne “Gump” Wheaton, all my “circle of brothers” (too many to list – you know who you are), and on the home front, Keith, Claudia, Jennifer, Adela. Winston, and – at the heart of it all – Carrie.

Brought to you by the letter “sssss”

© 2007 Atlantic Recording Corporation for the United States and WEA International Inc. for the world outside of the United States excluding Canada.
Printed in U.S.A. Lyrics reprinted by permission. All Rights Reserved.
© 2007 Anthem Entertainment/Lyrics Used by Permission.

Whirlwind life of faith and betrayal
Rise in anger, fall back and repeat
Slow degrees on the dark horizon
Full moon rising, lays silver at your feet